I received one Pimpernel potato at a seed-swap here in Thunder Bay in the spring of 2009 … and in 2011 I attended the same seed swap with a portion of the 52 pounds I harvested the third year (second generation). That’s how fast they increased. 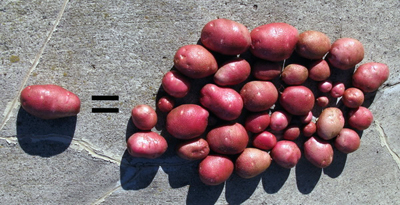 My first Pimpernel gave me all these!

Anyone else every heard of the Pimpernel? I don’t turn up much on the web, except one site that gives its pedigree and says it was developed in Holland in the 1950s. My father-in-law, who came to Canada from Northern Ireland, thinks he remembers it from the old days when he drove a truck for a farm in “the old country”.

It’s an attractive red-skinned potato with shallow eyes. The one I received in 2009 hadn’t even begun to sprout, so I assumed it was a good keeper. Was it ever! Here’s a funny story. The ensuing fall, when I had harvested about 5 pounds, I put my potatoes away in the cold cellar … or so I thought. In February of 2010 I got curious about how they were keeping, and went to the cold cellar to look for them. They weren’t there! A search of the whole house resulted, and we eventually found them in a sealed plastic bucket that was being used to support a small humidifier (with a heating element in its base) in the bedroom. Yawks! I was afraid to open the bucket! But I did, and found my Pimpernels as healthy as ever, although a little sprouted. Once back in the cold cellar they calmed down, and I planted them successfully in May. And that’s why I have 52 pounds now. 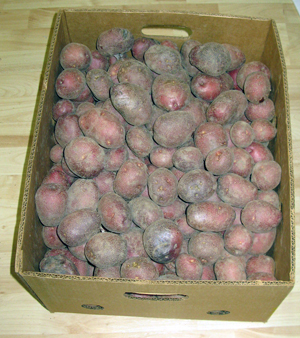 In the second season I harvested over 50 pounds

I did try to cook some of them, since I now had a fair amount. Peeled and boiled them for 40 minutes, and found they’d mostly disintegrated. This is a very starchy potato, it seems, so I suggest boiling them for a short time and mashing, or using them as bakers.

For growing, I found it to be a longish-season potato, which gave it lots of time to be very productive. The oblong tubers are very uniform and of medium size, clean up nicely and heal if nicked during harvest. The plants do not die until the frost hits them in September – and then only reluctantly. The first year my plants got small flower buds but no flowers. The second year, many of the plants had very pretty dark red flowers.

Try the Pimpernel if you can get your hands on some! If you’re local, you can contact me to see if I have any extra to give away. 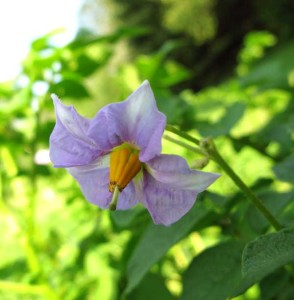