When I moved to Thunder Bay Region, one of my first wonderments was whether people had any success with apples here. It didn’t take me long to learn that folks had been growing apple orchards in the Slate River Valley (adjacent to the city of Thunder Bay) for many decades. 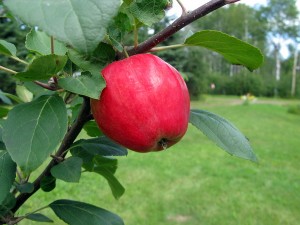 Back in our old orchard in Southwestern Ontario, we had few limitations as to varieties – except that we were too far south to grow good Northern Spys! Now, I found myself with the opposite problem – I was too far north for many of my favourite varieties.

Apparently, the limitation is not simply season length, which will preclude the ripening of apples that rely on a long, warm autumn. More importantly, most varieties of full-size eating apples have bark that is too tender to withstand -35 degrees C. In contrast to this are the crab apples, which are notoriously hardy. A compromise are the apple-crabs, which often have reasonable eating qualities, and even better preserving qualities, together with iron-hardiness. But what about nice sweet eating apples?

I asked around and consulted catalogues (and believe me, my research is continuing) and learned of several varieties of apples that grow well here and on the Canadian Prairies – hardy to Zone 3, and sometimes even Zone 2. In 2007 and 2008 I began planting trees, and now have a few Norland, Battleford, and Goodmac trees.

It’s too early to give good field notes on how they perform. I planted all as bare-root, three-year old stock, semi-dwarf.

Here it is again (I was really proud of it)

What I can tell you so far:

Norland: By far the most vigorous of the trees I have planted. They wanted to bear a full crop in their second year! I didn’t let them. My two Norland trees are growing just as fast as I would expect trees to grow in Southern Ontario, and will need some aggressive pruning. Lovely green foliage.

Goodmac: A cross between Goodland (a hardy Prairies cultivar) and Macintosh. They, too, are growing well, but had trouble in the first year with discolouration of the leaves, which resembled some sort of mineral deficiency. This was happening despite fair weather – in fact, far from the soil being wet and cold, we were in the middle of a drought. I suspect this was stressing the Goodmacs, but the others weren’t bothered by it. In their second year, after I had adopted organic fertilization methods, there was no leaf discolouration. No blossoms in year 2.

Battleford: I planted a few Battleford just last year, on the recommendation of an acquaintance here. Hard to judge them yet, but they were more vigorous in their first year than the other two. On the other hand, they didn’t have to deal with a drought.

Speaking of not dealing with a drought, conditions were so dry (more than I realized) when we purchased our land, that it was hard to judge where to begin planting trees. The result has been that last year, my trees stood in water for at least three weeks during our cold, wet June. Did they complain? No! In fact, the Norland tree that has performed the best, was in the wettest location.

Glad to find your site.I was looking for info on how and where to get Northern Spy apple trees.Local if possible.
I have been adding two trees a year to my little orchard for several years now. They are on a bit of a hill surroundind the house in clay loam. Three of my trees are about 15-20 years and I am not even sure what they are anymore.The summer of 08 was a good year for my old girls, while last year I had very few -possible June 6th frost impact??
I have a Norland and Sweet 16 from 2008 and two McIntosh planted last year. Buds looking good today on all.Gave a good prune to my oldest-lots of dead branches. TTYL.

Hi Wendy
My Norland is having a splendid year with about 38 apples still hanging on.Others have some leaf issues.Macs in 2nd year bloomed but no fruit as they all shrivalled(?) up.

Hi Wendy, Have you added more apple varieties to your orchard or heard of other varieties for NW Ontario climate? I am planning on planting some apple trees on our property at the Eco Centre. Norland is on my list.