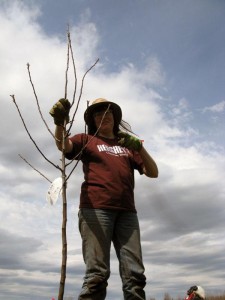 (If you’ve happened across this page, the orchard is outside Thunder Bay, Canada, in climate Zone 3a.)

It’s high time for an update! We now have 12 apple trees:

Our soil seems to be what apple trees want: deep, not too light and not too heavy. It’s a sandy loam with very few stones. Slightly sweet pH, not acid at all. A soil analysis I ordered when we came here showed a decent amount of organic matter as well, but low general fertility as far as potassium and phosphorus.

The trees have taken root easily (I’ve almost always used the bare-root trees from Landale Gardens in April, although my Honeycrisp was a potted tree from Trevisanutto’s). Growth has been impressive and steady.

One challenge with the soil is to make sure the trees are getting needed nutrients with generous applications of rotted manure or compost from April to the end of June. I usually make two applications, but I sense the trees would appreciate more if I had the time to get to it.

Two Battleford trees, planted 2008, died in 2010. Why?  I believe their location did not have good enough drainage for them, although the Norlands adjacent have thrived. The Battlefords got a great deal of what can only be guessed is a sooty fungus on their trunks, which caused the bark to peel and check.

Click on the image at right for a closer view.

All my trees have had a bit of this (anyone know exactly what it is?), but only the Battlefords seem to have been damaged by it.

Aphids!
Not a big problem, but they do like the tender ends of shoots, and can slow the growth of a young tree. If within range of the hose, I just spray them off. Otherwise, you have to squish ’em.

Yellownecked or Red-humped Caterpillars
The larvae of some boring grey moths, they aren’t so boring when they are stripping entire limbs of your fruit trees! These feed on many wild shrubs and trees in our area, and occasionally target a fruit tree. You will not get a widespread infestation – but the effect on an individual tree can be devastating. The caterpillars can hatch out anytime between June and early September. They try to stay together as a group as they move from leaf to leaf – and as they grow, from limb to limb. An entire limb can be denuded in a day.

Here are some photos from my orchard – prepare to be disgusted.  🙂 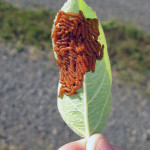 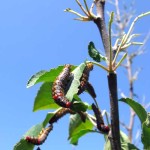 Control is as simple as keeping an eye out for a strangely “naked” area on a tree. When discovered, simply pluck the infected leaf or shake the affected limb (or spray with the hose). The caterpillars are unable to reorganize and get back on the tree. If you want, though, you can stomp them for good measure.

Apple Maggot
This inconspicuous little fly does damage almost anyplace apples will grow – including northwestern Ontario. It “stings” the fruit and leaves a very small raised black or brown spot when it lays its eggs on immature fruit. You’ll eventually see the brownish tunnels made by the larvae through the flesh of the fruit – but these may not be apparent until well after harvest. Control (or attempt to control) by keeping orchard tidy and removing prunings/fallen fruit.

Deer
Well, what are you going to do? When my trees were younger than three years old, I protected them with snow fence. I know deer can go over snow fence, but they don’t like to jump into small enclosures (thanks to our friend Cory Davies for this sage advice), so I enclosed a max. of four trees in each “square.”  It worked. However, now that the trees are larger, I’ve removed the fence to facilitate mowing (see “Mice” below).  The deer do come and nibble, especially in early winter when the snow is not too deep yet. They have not done significant damage.

Mice
This mini-enemy of fruit trees has done more damage to the trees I’ve known in my lifetime than deer ever have. Mice love to feed on apple tree bark in the dead of winter, if they can find shelter around the trunks of the trees. One mouse can easily girdle a tree (or a bunch of trees), killing it outright.

I almost lost some trees one winter when I still had the snow fence up. Long grass had grown around the fence. Mice nested in the grass over the winter, and made easy forays over to the trees for a snack. You could see their tunnels as the snow melted! 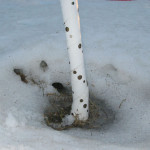 Mouse tunnels through snow to tree
~click to enlarge~ 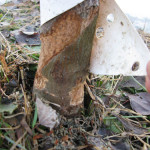 Prevention – mow the grass in your orchard, and trim any long grass around your trees before winter. Use spiral tree-guards on young trees, and make sure they are snugged down to the ground in the fall.

Last but not least … Bears!
We do love our bears at BearHaven! And, the bears seem to love us back and have not damaged our trees. However, many growers in this area have had trees damaged by bears who climb up to get ripe fruit and break the limbs off the trees – or occasionally break off an entire young tree.  The solution is obvious – pick that fruit before it gets completely ripe. Don’t leave fruit on the ground. A bear can smell a ripe apple from miles away.

Even if you do everything right, a bear may still damage a tree when it comes a-picking before you do. Just do your best.

4 thoughts on “Orchard Challenges and Pests”