We grew many varieties of peppers in Southwestern Ontario back in the “old days”, including jalapenos! Naturally, I was eager to try peppers here in my first year, 2007. I grew some green bell pepper and other pepper seedlings early, and planted them out at the end of May under plastic. They were happy enough, and I removed the plastic once the plants were over a foot high. But the summer never seemed to get hot enough to “blast them off”, and by September I had only a handful of smallish green peppers.

So, with my limited garden space, I moved on to veggies that I find more successful (although I admit to wandering into eggplant territory occasionally with mixed results).

I do know that peppers are grown in this area by many gardeners with a special interest in them. I assume that most use hoop houses or greenhouses, or perhaps in pots in sunny locations. If you are one of these gardeners, let’s hear from you! 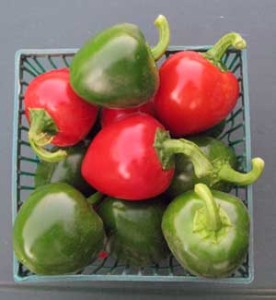 Wendy (author), Aug. 27, 2011
I’m going to reply to my own post for the sake of speed – this year – 2011 – I’ve successfully grown “Big Bomb” hot peppers in pots. The great thing about the pots is that they allowed me to move the plant inside during cold nights in June, and to ensure that they were always in the hottest, sunniest location I could provide.They have performed splendidly, and now I am selling them at the Nolalu Market.