Potatoes are so successful in Thunder Bay Region that they are grown commercially on a large scale by such farms as B & B Farms and Breukelman’s Potato Farm. 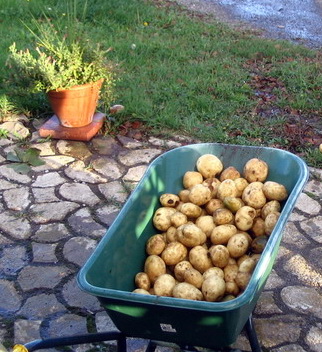 I haven’t had the time or the inclination to try too many varieties of potatoes, partly because I find the variety Superior to be such a winner. Superior is a early-to-mid-season white potato with a smooth skin and uniform plump oblong shape. Large amounts of small “new potatoes” are ready early in July, and larger tubers a few weeks later. Once full size, they hold well in the cool soil, with no tendency for the mature tubers to sprout. At least – that’s my experience! So far, I have had no trouble with scab either, although my soil was alkaline enough, apparently, to scab up adjoining rows of beets (later learned this was boron deficiency in the beets).

So far, my potato plantings have not been attacked by either blight, and for a few years I had no potato beetles either – I credit my isolation with this, since larger local plantations do suffer these problems. The first year I grew spuds, there were a few injuries from grubs, likely because the garden area had been grassed over for a couple of years before its “rehab” and still contained the kinds of insect you find in sod.

Since the crowds at the farmers’ market seem to enjoy red vegetables, I tried both Viking and Norland red varieties in 2009, which performed similarly. But the real winner, which I tried later, was the Pimpernel! So it has its own dedicated page here.