When asked to define the term “organic”, I have occasionally quipped that all vegetables are organic, since they contain carbon. Okay, it’s a wise-crack, but the chemical definition of “organic” is one of the few vestiges of high-school science that I carry with me, and so I like to trot it out. Indeed, Wikipedia tells us, “The name ‘organic’ is historical, dating back to the 19th century, when it was believed that organic compounds could only be synthesized in living organisms through vis vitalis – the ‘life-force’”.

Are we getting somewhere? Hmmm. Even in chemistry, where one expects facts to be black-and-white, it has been recognized in recent decades that the use of the term “organic” has always been arbitrary – based somewhat on whim. The same might be said, cynically, of the current and perhaps the future use of the term ‘organic’ to designate fruits and vegetables grown using sustainable farming methods and without synthetic inputs. The utility of the term depends on what we put into it, what we get out of it, and our agreement on a universal definition (within practical limits). What’s more, the term has begun to become politicized (most of us perceive that producers and consumers of organic produce are politically somewhat to the left), and also controversial (who sets the standards? who follows them? will “big business” follow them or subvert them?).

For small farmers who want to market effectively and to be honest with their customers (and this includes all the small farmers I have ever met), the use of the word “organic” when labelling or advertising our produce has recently become a complicated issue. This is why, increasingly, customers at farmers’ markets will see smaller producers using words such as “natural” or “ecological” instead. Don’t worry – the farming practices and the produce have not changed! Read on to see what’s new.

For the typical consumer, “organic” means, first and foremost, grown without the applied manufactured toxins we call pesticides (this includes manufactured herbicides and fungicides). The idea that such produce is better for your health appeals to common sense, and is borne out by research in some cases. Secondly, many consumers value the idea that organic produce is grown without the use of manufactured (synthetic) fertilizers. Thirdly, many are aware of and wish to avoid genetically modified food. Organic standards worldwide cover these three bases. I hasten to point out, for educational purposes, that certain very specific manufactured pesticides and fungicides are allowed under most organic standards – these have proven specificity (they are not wide-spectrum) and are proven to have no toxicity to humans or to the environment.

Many consumers are also aware that organic models of growing and farming are also about sustainability, wherein farmers foster the soil with careful farming practices (preventing erosion, boosting humus content, fostering beneficial microbes), and take care to lower the “carbon footprint” of our production – 90% of which effort involves cutting down on fossil fuel consumption by using on-farm or local inputs, and selling produce to the local market instead of shipping it far away.

Now, what we (and the Government of Canada) have been after for some time on the marketing side of things is a system of definitions that both producers/marketers and customers understand in the same way, so that few misunderstandings erupt about what is being produced and sold. To this end, it is theoretically helpful if a third-party regulatory body sets clear standards that farmers can follow and customers can understand.

Although Canada has long had a published standard for organic products, up until now participation by producers has been voluntary. But as of June 30, 2009, growers and manufacturers of organic products shipped into any Canadian province must adhere to Canada’s published organic regulations. The recent enforcement of the regulations has taken things up a notch, and consumers can now be confident that products using the word “organic” in ads or labels meet the rigorous standards, which are backed up by the Canada Food Inspection Agency. Shoppers will also begin to see the “Canada Organic” logo on both Canadian and imported organic food products.

Many consumers assume that all the fresh produce sold at their local farmers’ market has been grown using organic methods – but it’s always best to ask the grower if you want specific information. Shoppers are usually pleased with the answer, since many of our smaller farms use organic methods even if they don’t crow about it.

Another factor, when it comes to the small farms that supply local farmers’ markets, is that diseases and pests need less “artifical” controls on small mixed farms, in contrast to the situation in massive monocultures (e.g., 200 acres of broccoli plants). Pests and diseases don’t thrive as easily in the more natural setting of a small mixed farm, but they can spread like wildfire in a large monoculture. The end result is that, even if not farming organically, the grower on a small farm is less likely to need so much chemical artillery. Again, ask the grower about what they do and don’t use, and make an educated decision.

Ironically, with the new labelling regulations in place, consumers of local produce may see the word “organic” used less often at their farmers’ market. Again, this has to do with the size of the farms. Most local fruit & vegetable producers in the Thunder Bay area are not large enough to afford the cost of the organic certification process, which includes four years of farm inspections. Although this situation may change in the future, for now we are unlikely to see the new “Canada Organic” label on the wares of our smaller farms.

Canada’s new regulations cover only products that are shipped into a province from outside. While British Columbia, Manitoba and Quebec have adopted the federal standards to apply within their own provinces, Ontario so far has not. So for now, local non-certified producers within Ontario may still use the word “organic” (but not the new logo), provided they are not misleading the consumer. Nevertheless, many choose to use the words “natural” or “ecological” to describe their methods and products. This avoids any possibility of customer confusion, and of infringing on colleagues who have achieved organic certification.

As there is no regulation of such terms as “natural” and “ecological”, customers are encouraged to ask the how these products are grown or made. As always, the farmers’ market is a place where farmer and customer meet face-to-face, and the result is more than just a purchase. The information and goodwill shared between them is as nutritive as the vitamins in the veggies. So, don’t let confusion over terminology or regulations get in your way, either as a producer or as a consumer. Start a conversation. Get some info. Make a friend. And don’t forget the watercress.

How We Grow at BearHaven

I have found that, on the scale of my market garden, I don’t need very much manufactured fertilizer – in fact, some of my veggies need none at all, as long as I have amended the soil with a good amount of manure and bone meal.  At the local level, it is perfectly sane and in many ways preferable to grow food as naturally as possible.

However, I hope you won’t be scandalized to learn that I don’t believe we can feed the world using exclusively organic farming methods. New technologies including better and narrower-spectrum pesticides, more effective fertilizers combined with better tillage methods, and yes, perhaps even GMOs, will play vital roles in – with luck – improving the nutrition of people worldwide. We’re getting better at it, and learning from our mistakes (we’ll try not to turn Lake Erie green again). GMOs still worry me, but if handled right their potential to ease human suffering can’t be responsibly ignored. Cross your fingers and hope that those with GMOs in their hands have some wisdom in their brains. 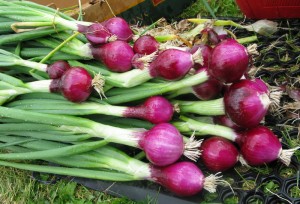 By the way, did you know that certain plants actually depend on insect attacks for proper growth? It’s true! Young broccoli plants can sustain up to 50% defoliation without decrease in yield, providing they have enough water – and at least one study suggests that a moderate defoliation by cabbage loopers actually increases head size! (see this link: Introduction to Organic Brassica Production) So there.

There are many reasons why it’s better not to use manufactured fertilizers if you don’t need to, many of them having to do with the health of the soil. Instead, I use composted manure, bone and blood meal, a bit of white wood ash for certain crops (be careful – it’s alkaline), and a small amount of fish emulsion (gentle high nitrogen) for certain seedlings that need a quick start. During the main growing season, plants that need a boost will receive some manure tea. Although composted manure is free of harmful microbes, no fertilizer is applied within two weeks of harvest.

Composted manure (and regular kitchen compost) is a wonderful fertilizer because it conditions the soil as well as providing nutrients. Simply put, the plant materials in manure and compost improve the soil’s texture, permeability, and nutrient profile.

These measures keep my garden and my plants happy. In special situations (wet weather that produces temporary nitrogen deficiency, for instance, or gardening in pots), I will use a little manufactured fertilizer. I use no manufactured pesticides. As far as keeping the planet happy, I market all my produce locally, and I strive to use local materials in my production. I’ve recently been offered local manure for my garden, which is the last big piece of the ecological puzzle that I wanted to find. While the bone & blood meal that I use comes from far away, I only use about 30 pounds of it in a year – while I use hundreds of pounds of manure! So a local source is indeed essential.